Sunday was Groundhog Day and the Superbowl!

Punxsutawney Phil was supposed come out of his hole, not see his shadow, and announce to the world the coming of an early spring .  Did not happen!  We are now in the throes of our second of three possible snow storms this week and digging out of 15-20″ drifts.  I have to admit that I do love the snow and all its beauty, but I am no longer praying for snow to keep my family and friends still talking to me.  🙂

The second upset happened on the football field.  Nowhere is football more revered than in the South, unless of course it is Superbowl Sunday when all of America becomes a fan.  I did not have a dog in the hunt – or a team in the game – but did not let that stand in the way of throwing a party.

We were divided in our allegiance to the two teams which kept things interesting, at least for the first few minutes before the game became a runaway train wreck.  The rest of the game we entertained ourselves with Superbowl Bingo, Orange Crush, Wolf Brand Chili, chocolate chip cookies, and Blue Bell Ice Cream (Homemade Vanilla, of course).

I missed most of the plays as I was collecting new words for next year’s Bingo game.  Gotta plan ahead!  If the snow lets up this week, I will make my way to the local stores to see what Superbowl items I might find in the clearance racks for 2015.  That’s where I found the referee “shirts” last year.  Woo Hoo! 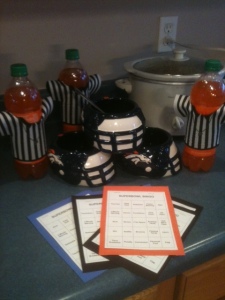